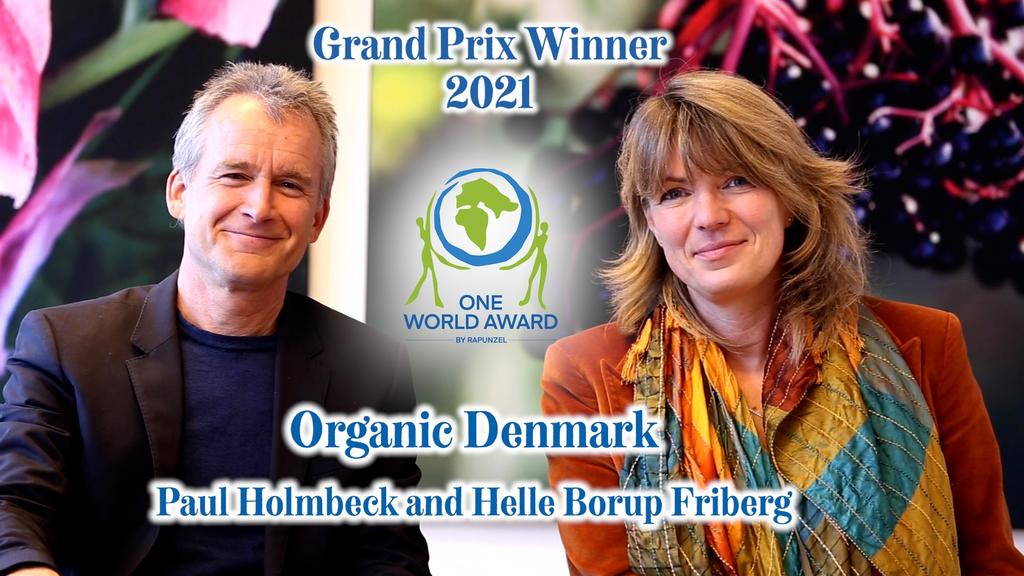 Organic Denmark wins the One World Award 2021 for creating strong organic policy, consumer support and partnerships with among others the grocery sector. This has made Denmark the world leading organic nation.

The One World Award (OWA) is awarded by IFOAM - Organics International, the international umbrella organisation for organic food and farming, and Rapunzel Naturkost, one of Germany’s largest organic companies. The main prize is EUR 25,000 – approximately DKK 175,000. The awarding of this year’s main prize to Organic Denmark is in recognition of the association’s strong political and market work over the decades.

"We are honoured to win this prestigious award. Every day we work for a world that thinks and acts organically – for the benefit of people, animals and the environment. An award like this is a valuable recognition of the work we do and the vision we have in Organic Denmark", says Helle Borup Friberg, CEO of Organic Denmark.

The OWA jury placed particular emphasis on the fact that Organic Denmark has forged strong collaborations throughout the value chain and society.

"We have been good at collaborating broadly with all political parties, trade unions, agricultural organisations as well as consumer, environmental, animal welfare and climate organisations. And not least with our Organic Denmark members: farmers, companies, professional kitchens, and consumers.  This has developed the organic market," adds Helle Borup Friberg.

Former CEO of Organic Denmark Paul Holmbeck, who is one of the architects of market partnerships and Danish organic policy, which among other things has ensured that public kitchens serve organic food, has this to say.

"It has been a tremendous effort on the part of many – a real team effort – but one that has created the strongest organic policy in the world and a model of cooperation and market development that many countries are now interested in.

The award is both an honour and quite a big surprise when you consider how much is being done in the organic world – not least by the other finalists.  Organic Denmark is a movement with a continued great potential for setting an agenda in politics, the market and Danish agriculture."

The award comes with a cash prize of DKK 175,000. The money must be used in an exciting and important area of ecology.

"We know that organic farmers and NGOs are doing an important job for people and our planet. At Organic Denmark we would like to use the prize and the economic recognition in an area of great importance for both climate and biodiversity, namely agroforestry. We have a four-year project involving organic farmers, businesses and kitchens. We would like to further strengthen this work with the prize from the One World Award," says Helle Borup Friberg, CEO of Organic Denmark.

Learn more about the Danish organic success story in this short video.

For further information about the One World Award please visit www.one-world-award.com

Organic Denmark's Speech of thank you

Listen to former CEO Paul Holmbeck and CEO Helle Borup Friberg deliver their speech of thanks for receiving the One World Award.